And there was a smell.

There are many unpleasant odors on a farm, but Henry recognized this as the smell of something unmistakably dead. Like the time a mouse died inside the wall of their bedroom. It was decay, and it was coming from her.

She was shaking slightly, as if upset. Henry hesitated while he reassessed. Her shoulders were pulled back, and the flower arrangement she was carrying dropped to the forest floor. The left hand shifted across her body and passed something to the right hand that Henry could not see. Then her right arm turned outward, and the silhouette of Henry’s hatchet became clear.

He looked down around his feet in a panic, knowing he would find his dropped hatchet; she had it now. How the hell…? His hopes sank as he realized the time for talk had passed; this was not a neighbor or even a living person – the smell as not only strong; it was overbearing. This was a being with an agenda he couldn’t pretend to imagine.

Tim Russell just put his last dollar on a handyman’s dream; a quaint but dilapidated farmhouse in New Hampshire. Newly single after a messy divorce, his plan is to live in the house as he restores it for resale. To his horror, as soon as the papers are signed and his work starts, ghosts begin to appear. A bone-white little boy. A woman covered in flies. Tim can’t afford to leave and lose it all, so he turns to his real estate agent Holly Burns to help him decide whether he has any shot at solving his haunted problem. Can they solve the mystery before he loses his investment…or maybe his life?

Swift as the drop of an ax, Clark build the dread in The Patience of a Dead Man from the outset, leaving no character safe from the antics of this haunted fixer upper. Following Tim and Holly on their quest to nourish their budding romance while they battle horrifying nightmare memories that are not of their own making, and a crazed, all too solid ghost woman hell bent on hurting someone, anyone, Clark takes the reader through a story of horrific deeds, unfortunate luck, and a century long battle.

While some parts, particularly at the beginning of the novel, were a little repetitive and could have been edited down a touch, the main story is still gripping and the romance that flourishes between recent divorcee Tim and his not so recent divorcee and estate agent Holly, bring a welcome respite from the continued violence of the mysterious woman that stalks the property.

The Patience of a Dead Man is a paranormal romance that plucks at the heart strings and in the same breath, will have your heart in your mouth, fearing the woman with flies on her face. 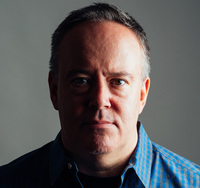