“Belle!” hollered Beau within the darkly lit hallway leading into the living room. “Belle” What the hell… where you at?” He stumbled against the wall as his hands were wet and his eyes held no contact lenses, nor glasses atop his nose.

The television screen glared a spasmodic juxtaposition of non-complementary colors onto the young child. Beau glared his own shade of hazel her way. “Didn’t you hear me? Did you hear anything?”

She laughed, not at her big brother, but at the cartoon pie character’s actions that she loved so. Beau engulfed a deep breath while walking with deliberate silence near the sofa, where Belle had set up camp. As he set himself near her frame, she became uneasy. He reached his not so steady hand outward toward the remote controller. She noticed a dry redness on a fingertip or two, the residue sinking into the controller’s glob-like buttons as he unexpectedly raised the volume to cover up his speech. “Listen up, kid. We gotta talk.” Beau’s grinding of his jaw was a machine wrought with the law of the world.

“Now, I know we’ve all been going through some… craziness, but I think I’ve found an outlet for our frustrations.”

“What?” Belle was still transfixed to the cartoon hero chasing a baby known as Minion for a midnight snack while its mother was too confused to react.

Belle turned to her eldest sibling, looking up into his nostrils.

Silence was the sound. The television was filler at this point.

Belle turned, breaking the spell, continuing on to watch the screen. Beau chewed on his cuticle; it tasted new, yet familiar whilst tossed back and forth from one side to another. He swallowed. Belle coughed, which’d enticed Beau to behave as he should before they both behave as they should not; he jumped onto her roughly and began to noogie her noggin.

Belle is in her final year of high school and is the leader of a gang. To give them some real memories to keep, Belle decides to combine a kill list from her other gang members and have it finished before the year ends. But, the reappearance of her older brother Beau, back from his stint in prison for murder and now a man of God, throws a spanner in the works. Can they convince Beau to take up his violent mantle again? And can Belle keep control of her members? 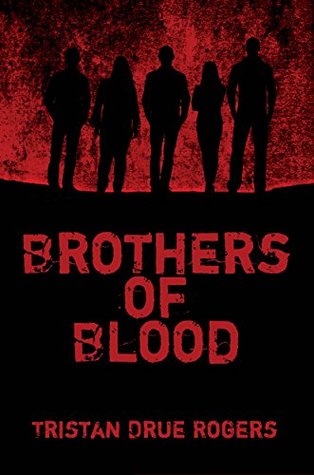 Brothers of Blood starts off with a precocious young girl, Belle, and her older brother, Beau, developing a liking for murder. Where this idea came from is never really explained as you ca see from the quote above – that’s pretty much it. Nor is it explained why both of them at completely different ages are not in any way affected, consciously or otherwise with taking the lives of other people. This requires quite a bit of suspension of disbelief to get through the whole story.

The beginning of the book should be interesting and a quick read, but the obnoxiously verbose language makes each page a struggle to get through. Writers often fear dumbing things down or being too simplistic, but you get the same reactions when you use a thesaurus for every other word – alienating the reader, and reducing the chance that they’ll have the energy or momentum to keep turning the pages. This language bleeds into the dialogue as well swinging wildly from 19th century phrases to modern slang, it’s jarring and confusing when dealing with a teenage boy and his young sister. Murderous gang members asking each other for ‘huggles’ is a little bizarre to read.

As the story progresses and the older brother goes away for his crimes, time is hard to pin down in some scenes. You’ll be imagining characters talking by moonlight and in the next sentence they’ll be walking into a just opened bank. I found myself disorientated more than once, and this is actually a book that pulled me out of my reading schedule because it was such a difficult one to get through with all of the off putting language issues. I was never quite sure if it was daylight or nighttime, if it was 1819 or 2019.

This is a story of children murdering whoever they want. The children don’t show any other signs of being unhinged (not that that in itself isn’t enough) and carry on ordinary teenage lives. There are no signs that they see other people differently or that other people react to them differently. They just happen to be brutal murderers, no biggie. But this actually takes away from the killings. There’s nothing interesting about them, I don’t feel for the murderers or the victims and I couldn’t figure out what the point of the whole thing is. No one gets punished, and there are no consequences for the people who deserve them, even for the things they do outside the murders. Conflict is sorely missed in this story.

Brothers of Blood begins with a confused narrative voice that is somewhat cleared up  by the middle of the book but not soon enough for the reader to enjoy the story, if this is a story one can be said to ‘enjoy’. Characters seem to face little consequences or conflict to do with the vile acts they commit and the novel feels more like a fever dream than a glimpse into the life of Belle and her brothers. Read with caution, perseverance is needed to wade through the thesaurus heavy writing, and don’t expect a satisfying ending.

Tristan Drue Rogers has had his writing and poetry featured in literary magazines (such as Vamp Cat, Genre: Urban Arts, Weird Mask, and more), and horror anthologies (such as 100 Word Horrors Book 3 and Deep Fried Horror). His debut novel Brothers of Blood is available now. Tristan lives with his wife Sarah and son Rhett in Texas.

Links to Buy and Review

What are your feelings on murderous children in fiction? Do you now of any black humour horror stories shedding a dark light on murder? Let me know down below!