*Disclaimer* I was given a copy of this book in exchange for an honest review.

“The brilliant blue flash of the electrical storm lit the old city as the thunder raged overhead. The creature knelt in the shadows, knowing there would be no prey moving around in such conditions. The rain didn’t bother it and neither did the thunder-claps, but the giant electrical spears that sometimes came from the sky and assaulted the buildings raised concern. It had hunted with itsbrothers and sisters for the first years of its life, before returning from a rare solo hunt to watch the jagged spears tear a building apart, sending it crashing to the ground on top of its family. The creature was the only survivor and had been on its own ever since.”

Screechers is a post-apocalyptic fantasy novella with dark elements to it. We’re introduced to the world through the eyes of the last adult ‘Screecher’, a humanoid intelligent predator that strikes out on its own owner to later discover that the last new born of its species has survived. We also meet human twins Austin and Denver and their dependent friend Brooklyn as they strike out from their destroyed community to survive in the hostile landscape they live in. Will either of these groups survive in their new isolation? What happens when inexperienced human meets engineered killing machine? 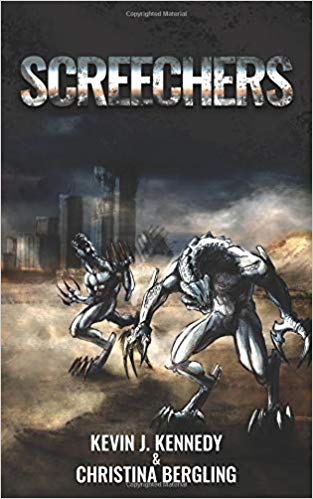 So, yet AGAIN I did not read the description well enough and AGAIN thought this was a novel and not a novella. That being said, is one of my only complaints. The world is so well set up, the characters so quickly real and three dimensional that I think it’s a shame this isn’t a chunky fantasy novel. While reading it, with the disjointed nature, the bad weather, and the predator species, reminded me of ‘The Shadowleague‘ series from Maggie Furey – always a good thing. I was a little confused as to the era of the story, whether its sometime in the future or a separate universe altogether, but as it is a a short story this doesn’t interrupt the reading experience as it would in a larger novel.

Screechers doesn’t take a deep dive into much, but you can dip your toe into what community means, what makes a family, and the tough decisions that need to made when there are no rules to follow. Bergling and Kennedy work well as co-authors, never feeling like there were conflicting styles in the narrative. I do wish there had been a little more gore/horror involving the humans, there are some great fight scenes sure, but not as much darkness as I’d hoped to see. I still really enjoyed reading Screechers however and would happily read it again.

If you’re a fan of post apocalyptic fantasy and creatures that could disembowel you by accident, you’ll enjoy Screechers and if you like it as much as I did, I’m sure you’ll be checking out the many other works that Kennedy and Bergling have put their name to in the horror genre as well.

Kevin J. Kennedy is a Scottish Horror author and editor, and a Bram Stoker Award nominee. You can find him on Twitter and on his website here. 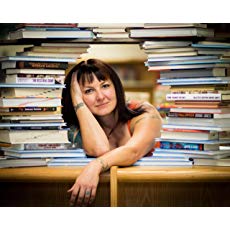 Christina Bergling is a an American horror writer from Colorado. You can find her on Twitter and on her website here.

Where to find it:

Do you want to see more horror in fantasy? Do you have a favourite horror monster? Do you prefer full novels or bitesized novellas to satiate your thirst for darkness?