“Though they said she never was human, exactly, Doris had held onto the belief otherwise – even as she sat in the back of a wagon with a few pigs being taken along the road southward.

It was a slow ride. She contemplated running, but where could she go? The man at the head of the wagon had a dog with him, and he would certainly set it loose to her. She tried to imagine that being bitten wouldn’t be that bad. This only made her blood run cold, and with that came a kind of numbness, until something large swooped down from a tree onto the man at the reins. His gingerly whistling turned to a yelp. As the dog barked and the pigs squealed, Doris took off.

Behind her, the dog let out a quick final screech.

Doris ran faster, ably dodging the star-lit silhouettes of the trees. But what was along the ground was another thing. She stumbled over rocks and roots, until something on the ground sent her tumbling to the dirt. When she looked up, all she could see was the silhouette of a man in a tricorn hat. And then the entirety of existence was the fiery pain where his teeth tore at her neck. Her last sight was the bleeding wound formed as the man pressed a pointy finger along the inside of his arm.”

In Late Night Partners we meet Doris, a victim of the American slave trade, who in her escape attempt, finds more than she bargains for in a contagious bite from a stranger. Cut to the present day and strange things are happening in the city where Doris and her Native American ghoul friend through the ages, Gesine, now live. Human Roger gets pulled into the fray after his elderly uncle Simon, afraid to leave his house because of a mysterious and bloody attack he suffered, and both of them find a world that neither thought was possible before. As the two worlds intertwine, the earthquakes shaking the city turn out to have a supernatural and shocking epicenter. With twists and turns for days, distinct and charming characters.

What I liked about Late Night Partners was obviously the uniqueness of the story. I’ve never read a novella quite like this, with characters like these, and I’m glad I got the opportunity to do so. There’s no fear for ‘diverse’ characters here, and there never should be, but more importantly there are no stereotypes either. Steuert’s treatment of not only LGBT characters and women of colour was nuanced and enjoyable, as was her treatment of much used creatures such as vampires and ghouls. I was surprised quite a lot in this book by the origins of the characters and their afflictions and the twists that the story too – that ending? Never would have seen it coming in a million years. Late Night Partners is definitely not a story you can walk into assuming anything and that made reading it quite easy to keep the pages turning.

The urban setting was also quite interesting for me. I have only read medieval type fantasy stories before and having this in the setting of a city was quite something different and works quite well I think.

One thing that bothered me in Late Night Partners was the time jumps. Between Doris in her beginning as a vampire and the characters in the present, I often got confused as to where I was supposed to be picturing them. This is something that can easily be fixed with some sub-headings but it did mean some re-reading. I also would have liked to have the romance side of the book explored more, and I am not a romance fan. I just feel like the characters could have been explored more in their interactions with each other, if this was focused on with a little more time it would have added another layer to the story.

I would recommend Late Night Partners to someone looking for a light, fantastical read. Anyone who needs another shot of vampires but wants an urban twist to it, and anyone who thinks they always know where the twists are going – you will fail for this one!

Late Night Partners is a new twist on an old tale and if you are looking for a diverse book you should definitely pick this one up. I’ve talked before about the need for more LGBTQ characters in particular in horror and ‘genre’ fiction, you can check out my thoughts on Lesbianism in Shirley Jackson’s The Haunting of Hill House here. 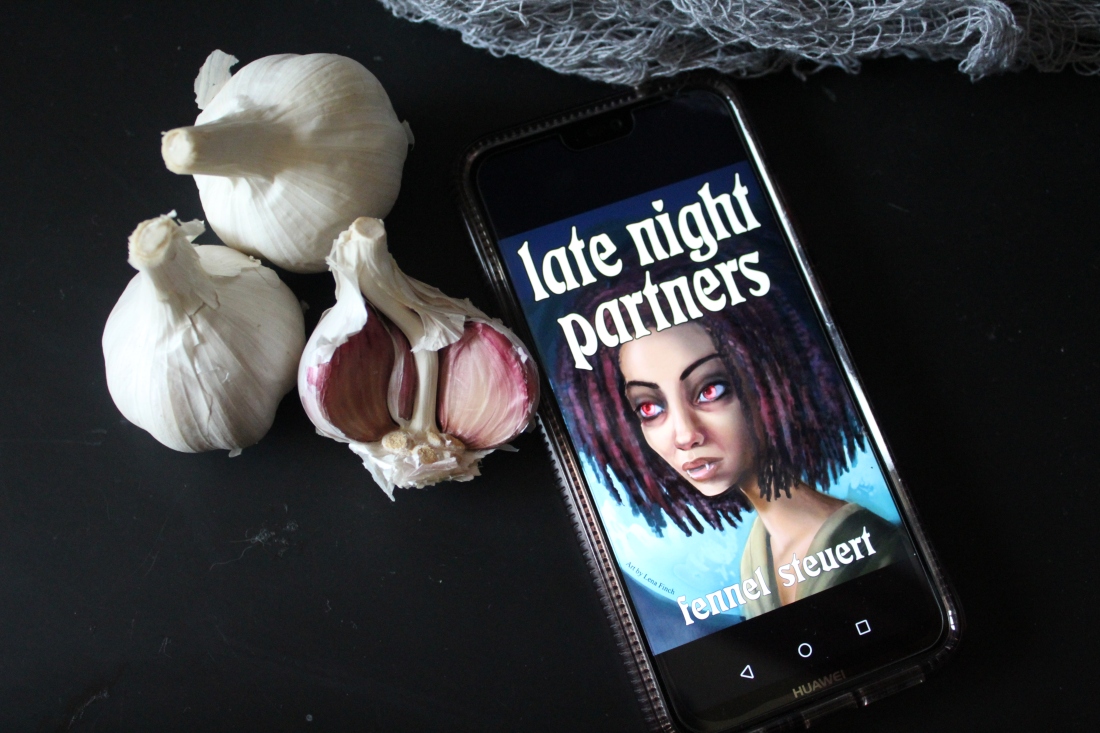 What do you think of modern vampire stories? Do we need more diversity in our fiction? Does the vampire mythology need a new re-vamp? (puns always intended here) Let me know down below!